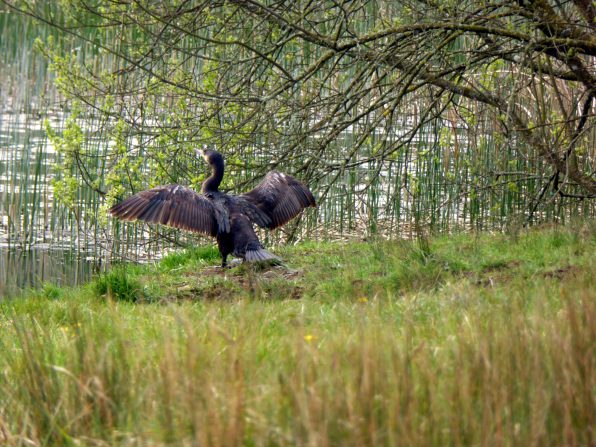 On Thursday April 11th Third Class spent the day in Curraghchase Woods for our forest based workshop with the LEAF Programme.  Here is a report written by the children in Third about their day. 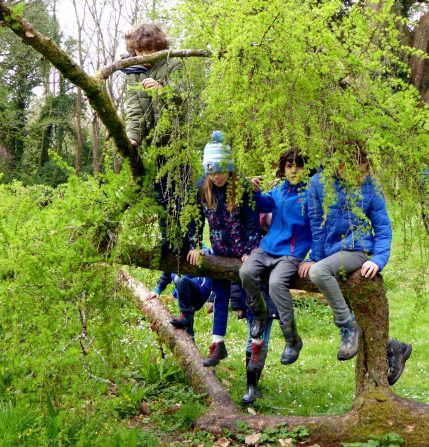 After that we split up into two groups.  One group went with Ray and the other group went with Rachel.  The group with Rachel did a scavenger hunt.  We had to find things such as a holly leaf, wood lice, a catkin, moss and loads of other stuff.  We had to team up in pairs to find everything and complete our list.  Our team found holly, moss, wood lice, catkins and ivy.  We got prickled by the holly three times and we fell in the holly bush.  We had lots of fun.  By Zia and Klara 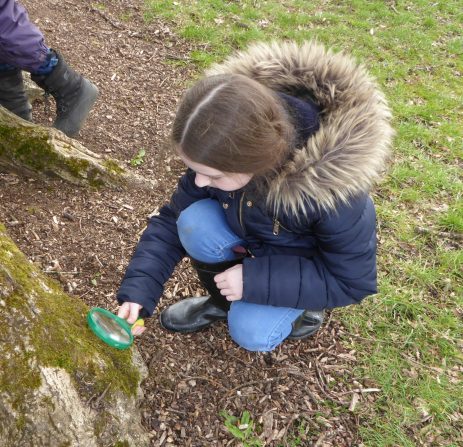 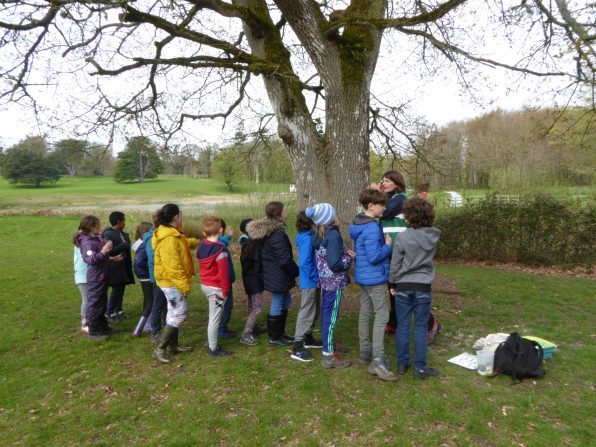 We went to visit the house in Curraghchase.   It has a very interesting story.  The house is full of bats now.  It was destroyed in a fire.  Someone was going to do it up again but then they discovered the bats.  The house has about 13,000 bats in it.  Many of them are the Lesser Horseshoe Bat, which are a protected species.  When the bats come out at night time they can eat between 600-800 midgets each a night.  There are lots of holes in the house so that they can get out to hunt.  Twice a year a conversation officer comes to check the bats are okay.  She is the only one allowed in to check.  By Garreth and Anastazja

We learned that the Oak Tree can grow up to 40 metres.  The Oak Tree can live for up to 900 years.  You can eat the leaves of a Hawthorn Tree.  The Yew can live up to 1000 years.  We saw the Sequoia Tree.  It is not native to Ireland.  The bark of this tree is very soft.  If there was a forest fire the bark of this tree protects the tree from the fire.  The Willow Tree is one of the most flexible trees in Ireland and is used for basket weaving.  By Miko and Yahya 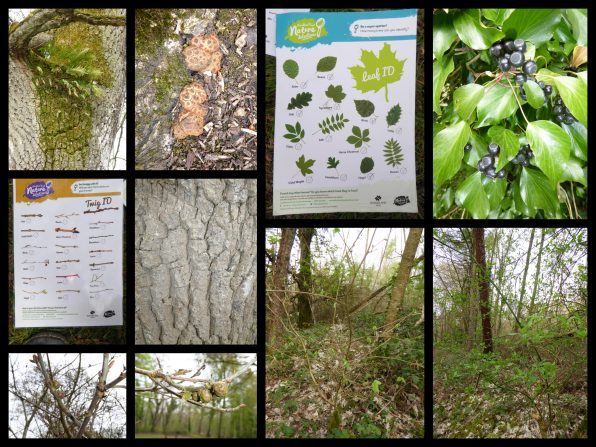 We learned about carbon.  It begins when we breathe out carbon dioxide.  The trees can separate the oxygen from the carbon.  It absorbs it.  It keeps it carbon for itself and gives you oxygen to breathe in, and then you breathe out carbon and the cycle continues.  We made hazel pendants out of hazel wood and string.  We put a hole in the hazel wood and put a string through.  We decided that it keeps us safe from the ghost of Curraghchase.   By Oscar and Eva 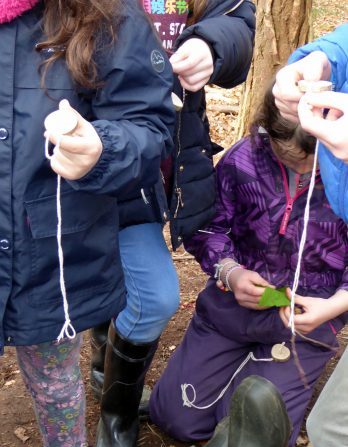 We heard or knew different versions of the ghost story of Curraghchase.  A maid in Curraghchase House died.  One night there was a terrible fire in the house.  The people in the house were woken up by loud banging on the door.  When they woke up they discovered the house was on fire.  They escaped from the house.  People believe it was the ghost knocking that woke them up.  Now, every Christmas Eve the ghost is said to cross the lake, as a ball of fire, to haunt Curraghchase.  Siún and Danilo

When we in were in Curraghchase we learned how to estimate the height of a tree. You turn your back to the tree and walk away from it to the point where you look under your legs and can just see the tip of the tree.  Then you take large steps towards the tree (about 1 metre) and count the footsteps.  That is the approximate height of the tree. We measured a Beech Tree, which is a non-native species, and it was 16 metres tall.  By Mildred and Jasmine 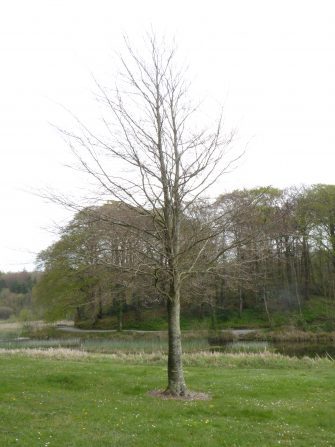 We sat for a while and did some mediation.  We listened to the sounds of nature.  In one minute we heard lots of sounds.  We heard a lot of birds and the wind blowing lightly.  The birds tweeted and chirped, and the wind said ‘ssh’. We sat there and listened to the birds.  By Abbey and Lili 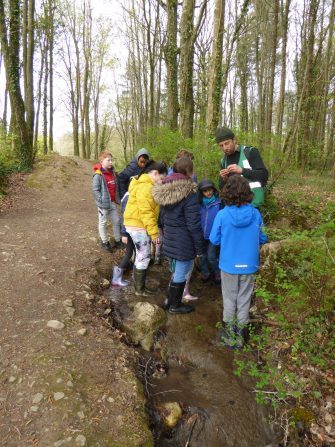 We saw lots of wildflowers on our walk.  Wildflowers are all different and colourful.  We found bluebells, dog violets, dandelions, daisies and more.  Did you know dandelions make for a great prank?  Puff dandelions can ‘sense’ where flower dandelions are.  Tell the other person to hide the flower dandelion somewhere on their body.  When they are ready you say to them that you think it is in their mouth.  The other person will, most likely, open their mouth to show you it is not there.  As they open their mouth you stick the puff dandelion in!!  By Lucy and Borys 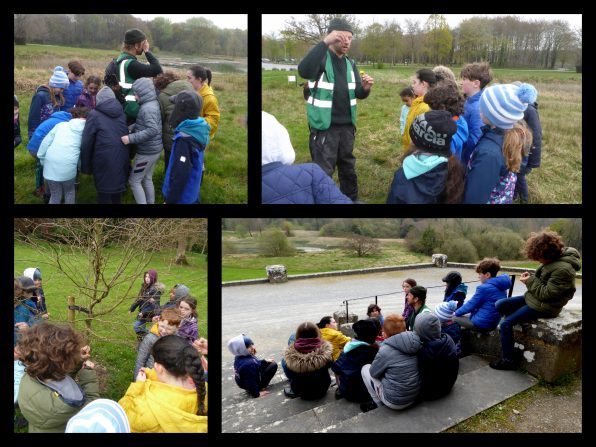 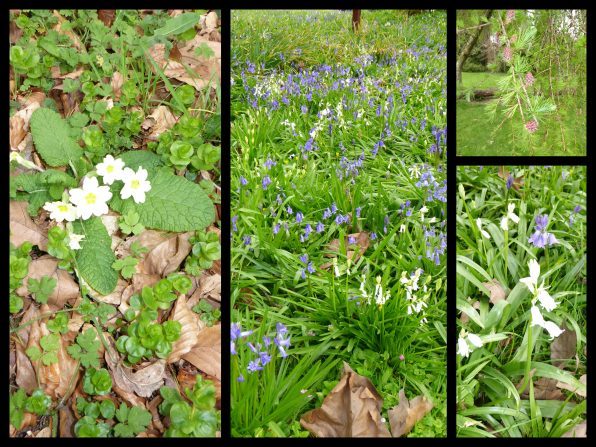 We learned a lot about birds.  We saw baby coots, robins, mallard ducks and swans.  We learned that swans are very protective of their eggs and their babies.  We saw a cormorant.  Cormorants can make their feathers waterproof by putting oil from their bodies on their wings. When they come out of the water them spread their wings out to help them dry quicker to be ready for when they need to back into the water in search of food.   By Wojciech and Ilir 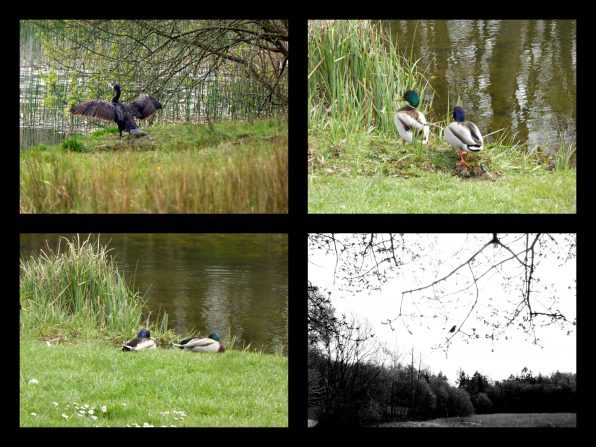 After a lot of hard work we had our lunch.  Ray and Rachel were very generous and gave us all a cup of hot chocolate.  After we were full we went to the playground.  Everyone wanted to go on the big swing.  We managed to take turns (four at a time and everyone else push).  There was a climbing wall, swings, baby swings, a big swing and a wooden tower.  Some people saw squirrels in the trees.  We had a great time.  By Louise and Guillermo

If you every want to figure out the age of a tree here is what you do:

After we had finished our workshops we ran up the hill in front of the house.  Then we all rolled down the hill.  It was great fun.  We went faster and faster by the minute.  We rolled all the way down until we reached Cathy.  We were really dizzy after.  It was a really great way to end the day.   By Alex and Eleanor 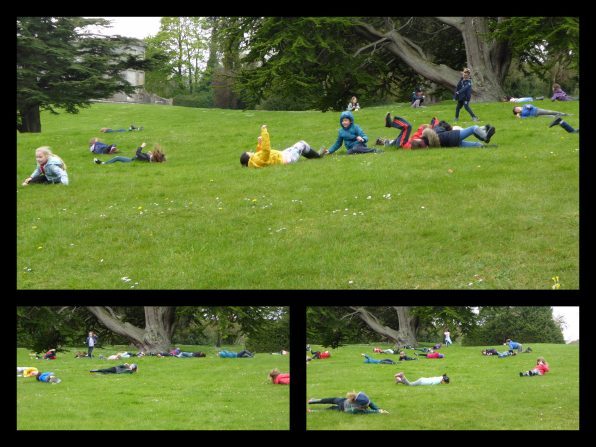 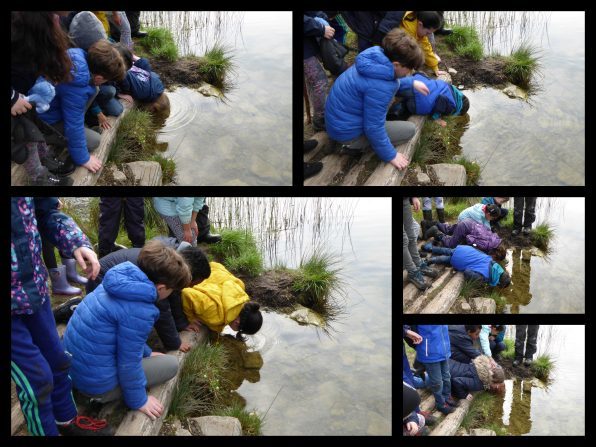 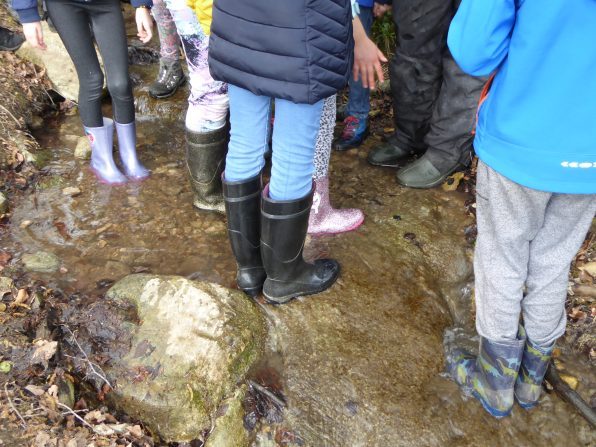 Thank you to the LEAF Programme for a great day in the woods.  We learned lots and had great fun.